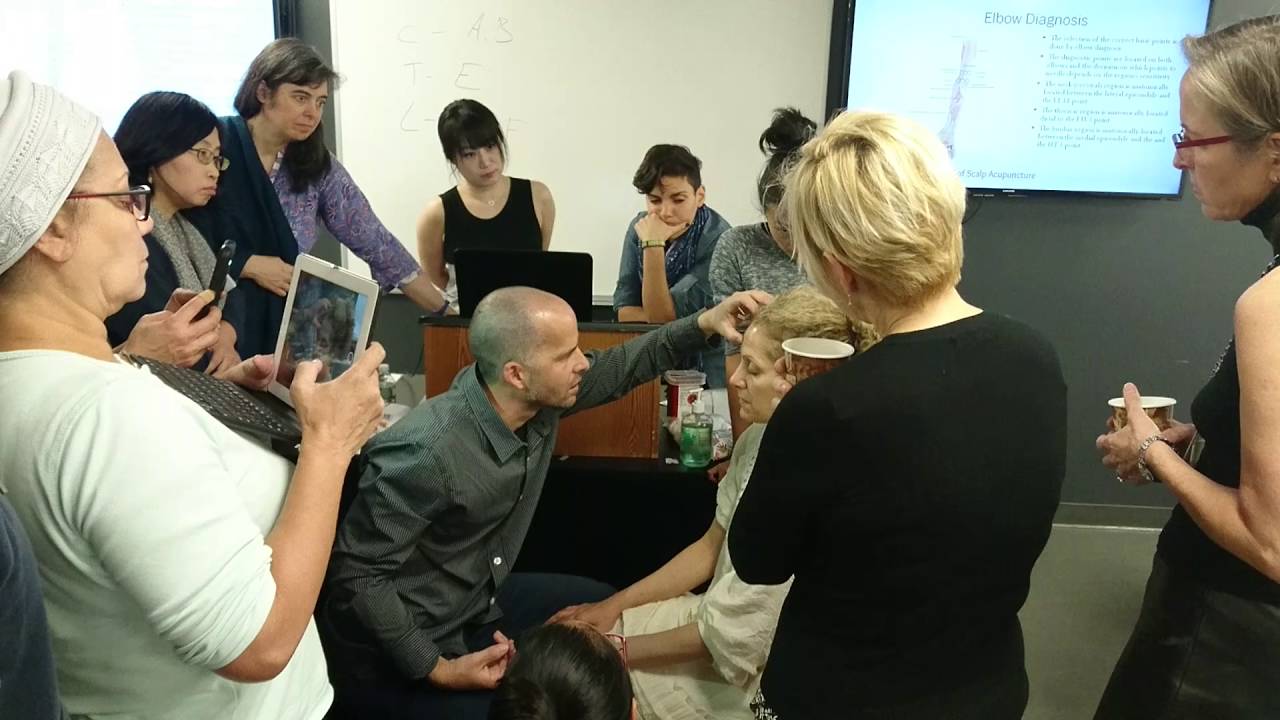 Q: First of all, we are really excited about your course in January in Amsterdam. We met last May in Rothenburg and we heard that the feedback for the course was really good. Tell us a little bit about how you got into YNSA?

DB: It’s a bit of a long story how I got into Yamamoto New Scalp Acupuncture (YNSA).

I originally studied Chinese medicine at “East West Collage” in Tel-Aviv, Israel, where we mainly studied Five Elements and Stems and Branches theories. As soon as I graduated I started my private clinic. Often, by using the techniques from Chinese medicine that I studied at school, I found that I was not getting good results.

Pain management, neurology and rehabilitation have always been a great interest of mine. One of my teachers in college by the name of Noam Bowmatz was a master in treating pain. At the time he was working at “Shiba Tel Hshmer”Medical Center in the rehabilitation department and I asked to join him as an assistant to study with him. Noam had also studied YNSA, but told me to work with the tools I had learnt from him first.

I did not think of YNSA again, until I one day came to the rehabilitation center and a practitioner by the name of Gil Kotler was called in to give a private treatment of YNSA to a patient that had suffered brain trauma due to a car accident. I was amazed by what I saw, when Gil inserted the first 3 needles, the patient from a stage of not moving her hand could now move it! WOW, I was sold!!!

I spoke to Gil and asked if I could learn the method from him. He agreed, so I followed him around for a while. After a few months I contacted Gil and asked him to teach a YNSA seminar. I wanted to help him organize the course, so I could study it properly. At the end of the course, Gil kept on telling me to go and study directly under Yamamoto. So that’s what I did, I went to study with Yamamoto himself in Japan. I actually went there a couple of times.

After coming back from Japan one time, Gil decided to retire, so I took over and started to teach YNSA in Israel.

At the time, my private clinic started to grow, and more and more patients were coming into the clinic suffering from neurological and pain disorders. I was getting excellent results with YNSA, so the word spread even more.

I also started working and doing research on the effects of YNSA in the rehabilitation department of Bnei Tzion Medical Center. Slowly, but steadily this method was adopted as an integrative treatment method and not only for research purposes.

Q: What exactly is the difference between Chinese Scalp Acupuncture and YNSA and can they be combined?


DB: There are a couple of differences between Chinese Scalp Acupuncture (CSA) and YNSA.

First of all, in my understanding the basis of his development of the YNSA method came from modern CSA, which was developed from Jiao Shunfa’s method.

YNSA is a microsystem; the YNSA points are located in different areas of the scalp, whereas in CSA the areas on the scalp correspond to the areas of the brain (homunculus). By needling these zones in CSA, you’ll be treating the corresponding brain areas. For example, the area of the foot will correspond or be located on the scalp in the same area where the area of the foot is located in the brain.

A second difference is that in CSA stimulation through manipulation of the needle is necessary. In YNSA, it is just about needling points. The needle needs to be inserted into a point, there’s no need for needle manipulations.

To sum it up, the difference between Chinese scalp acupuncture and YNSA is:

In my opinion it is easier to learn YNSA than Chinese Scalp Acupuncture.

Often, I find myself combining Chinese Scalp Acupuncture and YNSA. I believe that combining the two can help maximize the treatment results.

Q: Do you combine YNSA with other body acupuncture points?

The YNSA method was mainly developed for pain management, but from my experience as a Chinese medicine practitioner, I started seeing that you can use YNSA to treat internal disorders as well:

Q: What does a typical day in the clinic look like for you? What kind of patients do you treat mostly?


DB: A typical day in my clinic? Let’s divide it into two categories.

When I work in my private clinic, it’s a community clinic, so it allows patients to come into the clinic and not have to pay a large sum of money to be treated. There I see around 150 patients a week who suffer mainly, again, from pain. I also treat patients that are post- cerebrovascular accident (CVA) or Parkinson’s patients and MS patients.

I also see patients suffering from internal disorders, such as

Those types of patients also come to my clinic. But the majority of them are in pain.

In the clinic, a lot of times I combine YNSA and body acupuncture.

Q: How much time does a YNSA treatment usually take and how many needles do you use?

DB: YNSA treatments can run from 30 minutes to an hour. It depends what disorder the patient is coming into the clinic with. If it is more chronic, or more of a severe neurological disorder, the treatment will be closer to an hour. But if it’s an acute situation of pain – a sprained ankle, for example, or lower back pain – it usually is about 30 minutes.

To insert the needles in the correct point, it takes maximum 5 to 10 minutes. Once the needles have been inserted you can do some manual work with the patient.

The amount of needles depends on the type of patient. In my belief, what I try to achieve is “less is more”. In average, when I do a full YNSA treatment, around 6 to 10 needles maximum. In some cases, I’ll use maybe 2 to 3 needles to get the maximum effect and leave the patient with those needles. Those cases you’ll see more in MS patients.

Q: What is your favorite thing to treat with YNSA?

DB: The favorite thing to treat with YNSA is disorders that occur, because of a neurological origin. It could be anything from stroke to Parkinson’s, MS, Guillain Barré, musculoskeletal disorders, which are more caused by the neuronal dysfunction than the muscles themselves.

Sometimes it’s also fun when you have a patient that just suffers from pain, ankle pain for example, and you just put in a needle and suddenly it’s “Wow, the pain is gone!” These “wow” results give me a lot of pleasure.

Q: How long does it take to master YNSA?

DB: It doesn’t take too long to master YNSA. I think if you keep practicing in your clinic and you use the method, in about 2 months you can really master the YNSA method. Maybe even less. But if you take it at a slow pace, after about 6 months you should be able to master it.

Q: What kind of disorders will participants be able to treat after this seminar?

Secondly, after the seminar you’ll be able to treat neurological disorders such as the diseases and disorders which I’ve already expanded on – Parkinson’s, stroke, MS, back surgeries that went wrong, etc. You’ll get good results.

Other disorders that you’ll be able to treat well with YNSA gynecological disorders:

During the seminar in Amsterdam, I however speak less about internal diseases and more about neurological disorders and rehabilitation, because that’s my main area of expertise.

Neurological and chronic pain disorders are on the rise. Would you like to become an expert in treating neurological and pain conditions with acupuncture? Then this seminar from January 11th-13th 2019 with David Bomzon and Avi Amir is definitely for you! Sign up today, only limited spots available!
Learn more